Nantes (France) and Härjedalen (Sweden), 4 November 2022 – Starting in November 2022, the company Lhyfe (EURONEXT: LHYFE), a world pioneer in the production of green and renewable hydrogen for transportation and industrial applications, and the municipality of Härjedalen will be exploring the conditions for production of green and renewable hydrogen gas in Härjedalen. This so-called feasibility analysis will be presented early next year. The results will determine whether a more detailed project feasibility study goes ahead. 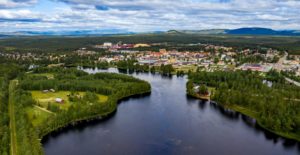 Caption: Härjedalen municipality and Lhyfe are investigating whether it is possible to start production of green hydrogen in the municipality (photo Morgan Grip).

“We currently have two wind farms, one built and one under construction, in the south-eastern part of the municipality. This, combined with the proximity of the Inland Railway, means that we believe we have a good opportunity for hydrogen production in the municipality. It is a political priority to do what we can to take advantage of the development opportunities arising from the green industrialisation now taking place in the country. It therefore feels very good to have initiated a collaboration with Lhyfe to further this ambition”, says LG Nordlander, Chairman of the municipal council (S).

“Härjedalen has really good conditions. Good connections to the Inlandsbanan and activities linked to the wonderful nature, summer as well as winter. The region is also really well placed from an energy perspective”, says Jens Marquardt, Project developer at Lhyfe Sweden.

A plant producing local green and renewable hydrogen could interact with the local electricity surplus from wind and hydro power and relieve the main electricity grid. Production of hydrogen in Härjedalen could provide hydrogen for transportation and industry, phasing out fossil fuels and reducing the region’s carbon dioxide emissions.

“We want to build hydrogen production in this region to accelerate and enable the transition to fossil-free, for heavy and long-distance transport”, explains Björn Santana Arvidsson, Regional Manager for Lhyfe Scandinavia/UK.

“Green energy is the future and will benefit the development of Härjedalen, in both small and large ways to create a fossil-free Härjedalen. The common driving force is to contribute to the climate transition with local green hydrogen extracted from the renewable energy production we already have in the municipality. If the conditions are right – and we believe they are – we can contribute even more to the necessary climate transition”, says Tomas Mann, business developer, Härjedalen municipality.

The feasibility study will analyse the possibilities for the production of green and renewable hydrogen with an estimated capacity of 5 MW and aspects related to energy supply, production capacity, choice of technology, location, available land, use of waste heat and coproduced oxygen gas.

Launched in Nantes (France) in 2017, Lhyfe produces and supplies green and renewable hydrogen for mobility and industry. Its production plants and upcoming projects are designed to provide green and renewable hydrogen in industrial quantities and form part of a virtuous energy model benefitting the environment. The company is a member of Vätgas Sverige (Hydrogen Sweden) and of Hydrogen Europe.

Lhyfe inaugurated its first renewable green hydrogen industrial production site in the second half of 2021. The company has a commercial pipeline representing a total production capacity of 9.8 GW by 2030 (figure as of September 2022). Following an offshore research program initiated in 2019, a test phase in real conditions for the world’s first offshore renewable green hydrogen production pilot site linked to a floating wind farm was started in September 2022.