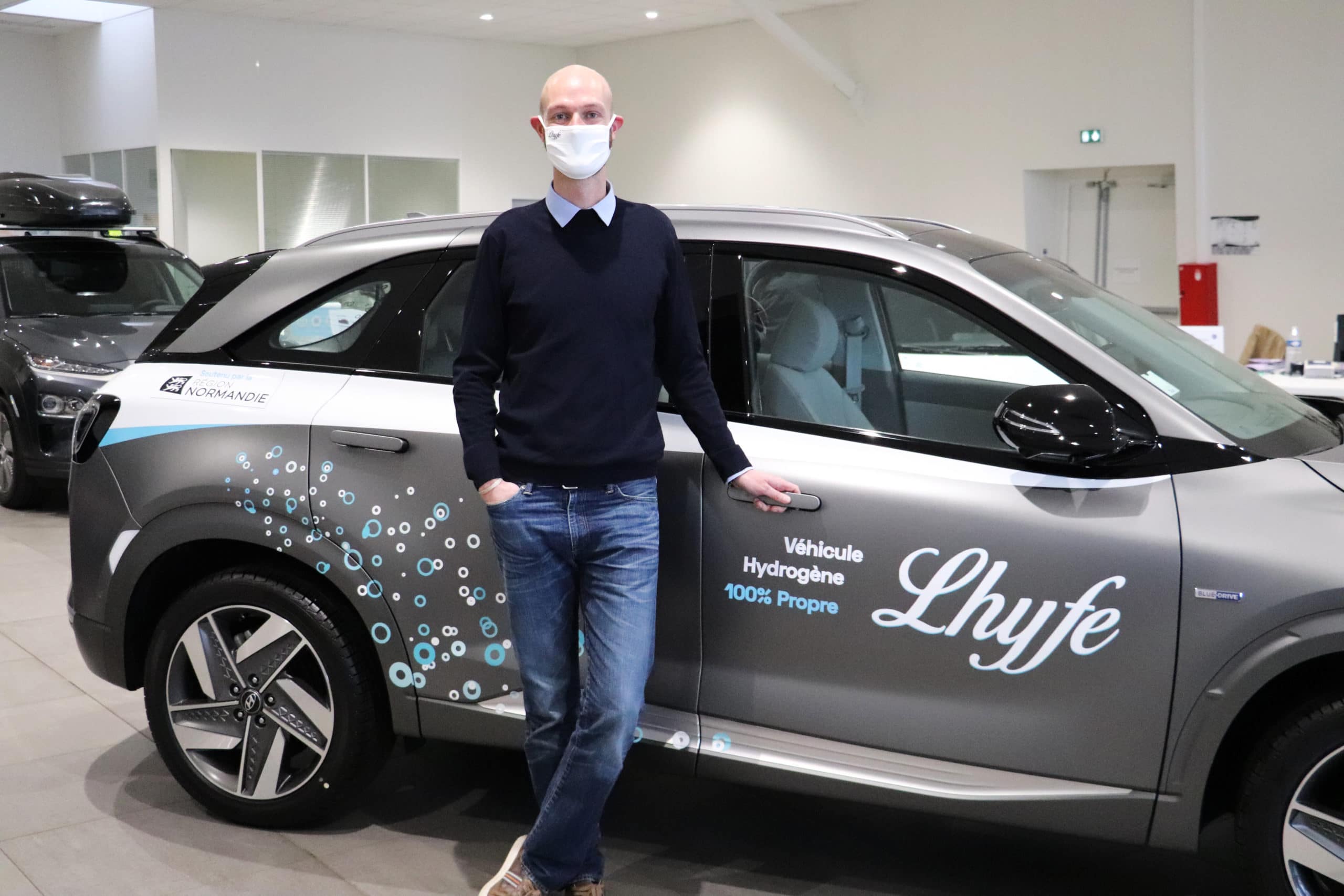 Together, the three players have confirmed their common determination to make hydrogen mobility as widely accessible as possible.

Much more than a transaction, the acquisition of the hydrogen car is symbolic of clean mobility from production to use.

Lhyfe, Europe’s first producer of green hydrogen from renewable energy sources, yesterday, very symbolically, took possession of the keys of a NEXO, the hydrogen car from Hyundai which is a pioneer in the development of this alternative energy. Lhyfe purchased the vehicle in Nantes from DMD, one of western France’s leading dealerships and one of the first to sell hydrogen cars in the region.

The Hyundai NEXO SUV chosen by Lhyfe as its first company fleet vehicle will be the very first car to run on clean green hydrogen. Europe’s first green hydrogen producer was won over by the car’s autonomy – Bertrand Piccard’s record last year of 778 kilometres on a single tank was with a NEXO. Moreover, the IIHS (Insurance Institute for Highway Safety) put the NEXO in the Top Pick+ category, which is the highest security ranking awarded by this body financed by large American insurance companies. Its performance is on a par with internal combustion engine cars and it has some of the most advanced technology on the market. Furthermore, the NEXO is a hydrogen fuel cell electric vehicle. This means that it doesn’t store electricity in a battery; it is the battery that generates electricity in real time from the hydrogen contained in its tanks. And these tanks only take three to five minutes to fill. By spring, Lhyfe’s site in Bouin (Vendée) will supply at last 300 kilos per day of green hydrogen to various stations in Pays de la Loire (in La Roche-sur-Yon, Les Sables, Le Mans, etc.). Plans for other facilities are also well under way, for example in Brittany, Normandy and the Centre region of France, as well as in other regions of France and within Europe.

We are delighted to – at last – be driving on hydrogen power, and from 2021 that will be green hydrogen power! But, more importantly, we are very happy to be contributing – with Hyundai, DMD and the local authorities that are committed alongside us in this transition – to the creation of a full and immediately operational value chain for clean hydrogen, from production to use, in Pays de la Loire.

DMD ready to promote hydrogen-powered vehicles in the area

For the purchase of this vehicle, Lhyfe called on the DMD dealership in Saint-Herblain outside of Nantes, which is historically one of the first dealerships in the west of France to offer hydrogen cars

We are very happy to have sold the first NEXO in western France to a major player in this energy transition. The fact that Lhyfe will soon also be supplying clean, green hydrogen locally will be crucial, as will the installation of new refuelling stations, as regards our capacity to sell hydrogen cars in the coming months in western France. We are ready to widely promote this new green mobility in the area

Hyundai, the first car manufacturer to mass-produce hydrogen vehicles, has been preparing the zero-emission vehicles of tomorrow since 1998. With 4,987 units already sold, the car manufacturer was already the largest seller of fuel-cell electric vehicles (FCEV) worldwide in 2019. Hyundai plans to produce 700,000 hydrogen cell systems a year by 2030. NEXO is its second generation mass-produced hydrogen car.

At Hyundai, we deeply want to develop carbon-free mobility. We are delighted that an operator like Lhyfe is engaged from today in the production of clean, green hydrogen on a large scale to make this fuel even greener.

The role of French government and French regions in hydrogen deployment

The price of hydrogen cars is admittedly still high (around 65,000 euros), but there are attractive regional schemes that support businesses and private individuals in purchasing them. Moreover, production volumes for hydrogen technology are growing exponentially and a significant drop in price is already being seen; the aim of hydrogen car producers being to compete with petrol or diesel cars. To conclude, Matthieu Guesné said: “The French government and regions have a key role to play in developing hydrogen by further intensifying their support: