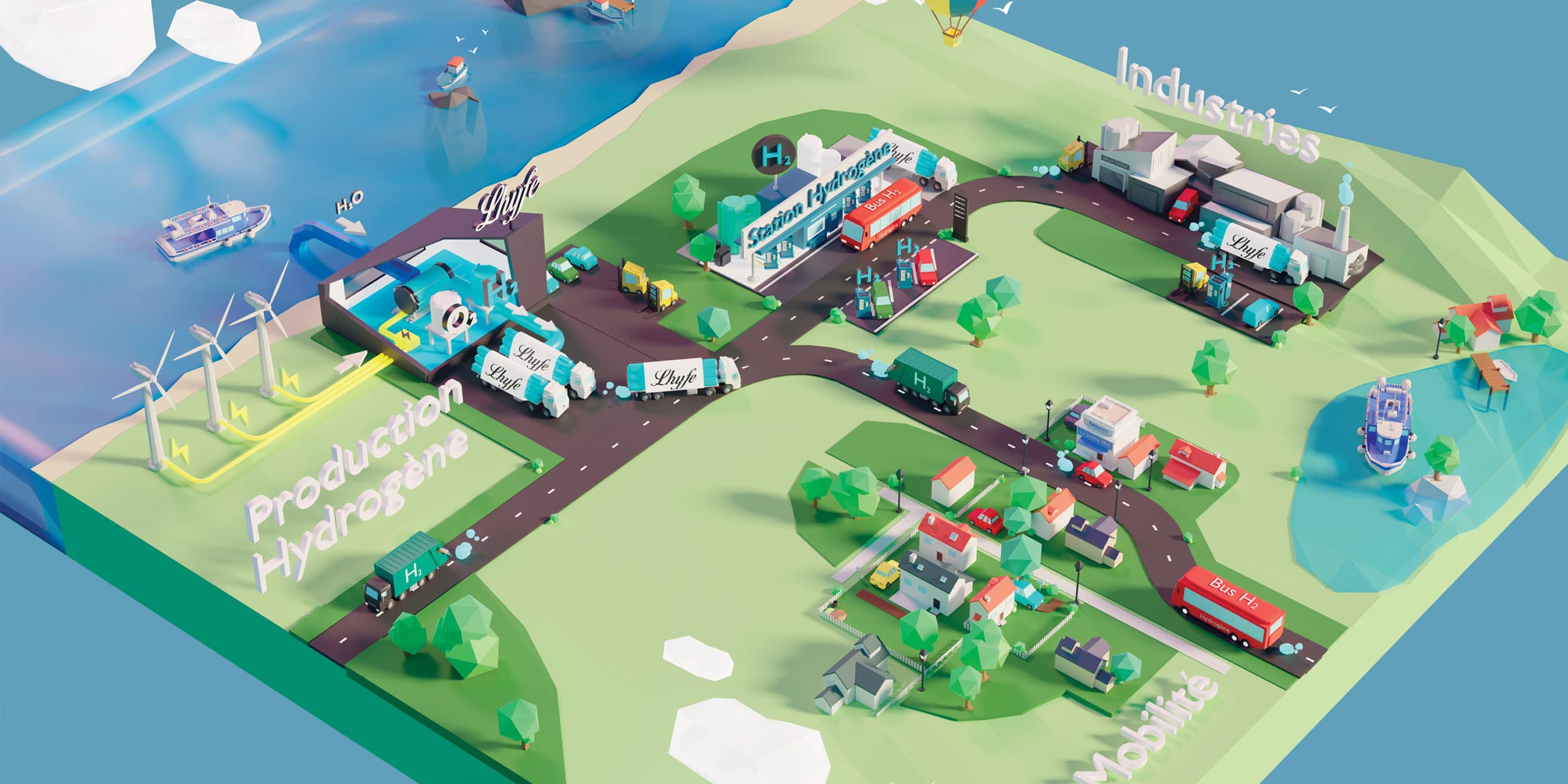 Lhyfe is proud to announce that the joint H2Ouest project – proposed in conjunction with five partners in Pays de la Loire – is one of ten French projects selected by the French Environment and Energy Management agency (ADEME) in January 2020, in its second call for hydrogen mobility and hydrogen mobility ecosystem projects.

H2Ouest is the result of a partnership between six operators from Pays de la Loire, which together cover the entire green hydrogen value chain (production, delivery and local uses) and all types of area:

H2Ouest aims to massively deploy green hydrogen use in Pays de la Loire, and create an ecosystem for hydrogen-powered mobility.

This ecosystem convinced ADEME’s jury based on its three fundamental principles:

An economically viable project: H2Ouest has chosen a pooled and local production system which will ultimately be contained within a 150 km to 200 km radius of the points of delivery. By making green hydrogen accessible as widely as possible through a cost-effective model, this fuel has every chance of developing massively on the market and providing a real alternative for mobility.

An innovative and replicable project: H2Ouest has several features that have never been seen before in France:

ADEME’s decision to support this project confirms that all of the components for the deployment of green hydrogen in France are now in place. H2Ouest is one of 20 candidates chosen to share the 90 million euros of funding provided by ADEME.

We are proud to have succeeded together in convincing ADEME that the ecosystem around green hydrogen exists and is now viable. This is a strong message for all the local authorities, businesses and private individuals, who can now seriously consider switching to green hydrogen. We will be happy to provide any interested parties, who are located less than 200 kilometres from Bouin, with the completely green hydrogen that we will be producing from 2021.

We are delighted that this regional multi-partnered project has been recognized by ADEME. The development of a fleet of buses and refuse collectors as well as a hydrogen production facility in our region is essential for the establishment of a sustainable H2 ecosystem.

H2Ouest is a project which is in line with our values, and with our DNA. ACO, in both its capacity as club and race organiser, has always strived for progress in the field of mobility. We must today offer carbon-free mobility to succeed the energy transition. Demonstrating the utility of hydrogen on the racetrack before 250,000 spectators or millions of TV viewers, as well as participating in the creation of the H2 filling station that will be used to refuel buses followed by fleet vehicles and later privately owned cars, are some of our key missions. We must play an active role in awareness raising and decision making. What exciting prospects!

The ecosystem that we have created in Pays de la Loire is the proof that it is now completely possible to deploy fully green hydrogen on an industrial scale, in France. This ecosystem, which is replicable in any area, has the advantage of using a short distribution channel and offering real economic benefits to local stakeholders. It is high time for a new energy paradigm; we are ready to initiate this change with all those who want to go for it!