Lhyfe, based in the North East of England, was competing at the Franco-British Trade & Investment Awards which recognises the best of French and British business.

The French headquartered multinational Lhyfe launched in the UK in June 2022 and is identifying large-scale opportunities to work with regional partners throughout the UK to help them decarbonise and to support the UK’s net zero ambitions.

The company has a commercial pipeline representing a total production capacity of 9.8 GW across Europe, and the UK entry is its latest step in its drive toward carbon reduction.

“I’m delighted that Lhyfe has been recognised as a pioneering clean growth business by the Franco British Trade & Investment Awards.

“The UK has been at the cutting edge of industry and innovation and green hydrogen is the next green revolution.

“Production at scale has the potential to significantly contribute to the UK’s drive to achieve its net zero ambitions.

“Lhyfe is working at pace with partners to deliver projects that create real local value, and this award demonstrates the value of working closely between Britain and France.” 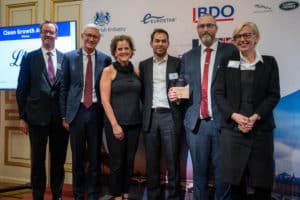 Launched in Nantes (France) in 2017, Lhyfe produces and supplies green and renewable hydrogen for mobility and industry. Its production plants and upcoming projects are designed to provide green and renewable hydrogen in industrial quantities and form part of a virtuous energy model benefitting the environment. The company is a member of Vätgas Sverige (Hydrogen Sweden) and of Hydrogen Europe.

Lhyfe inaugurated its first renewable green hydrogen industrial production site in the second half of 2021. The company has a commercial pipeline representing a total production capacity of 9.8 GW by 2030 (figure as of September 2022). Following an offshore research programme initiated in 2019, a test phase in real conditions for the world’s first offshore renewable green hydrogen production pilot site linked to a floating wind farm was started in September 2022.